Old-Fashioned Housekeeping Tips That Still Work – and Why 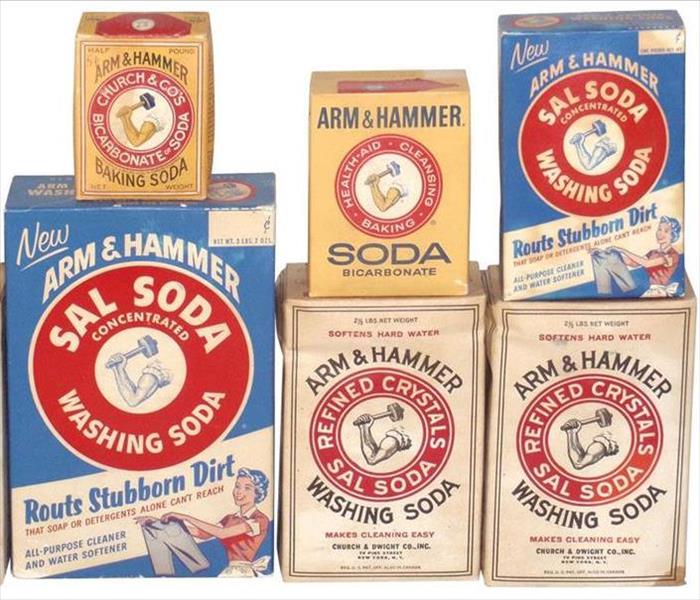 Home styles and trends have certainly changed over the decades, and unless you actually enjoy washing clothes and dishes by hand, improvements in home technology have made housekeeping tasks faster and less time consuming.  But did you know that many of our best, most trusted, most effective housekeeping tips are over a century (or more) old? Here are some tried and true old-fashioned housekeeping tips that you’ll want to try in your own home.

History: For baking, gentle cleaning and odor removal, nothing beats baking soda. This water soluble powder, usually found in the baking or cleaning section of your grocery store, is inexpensive and versatile. Baking soda’s chemical makeup is sodium bicarbonate (NaHCO3) and in nature it is found as nahcolite, a derivative of natron. The history of this mineral is lengthy: Ancient Egyptians used this mineral to create the paste for hieroglyphics. In 1846 two bakers in New York, Dr. Austin Church and John Dwight, started manufacturing and selling sodium bicarbonate. Their partnership eventually became the company we now know as Arm & Hammer. Although it was originally promoted for its uses in baking, baking soda was quickly adapted for money-saving personal care and other uses, like gently removing stains and odors, and became a trusted member of the household. In 1986 the copper-lined inside of the Statue of Liberty, which was covered in 100 years’ worth of coal tar, was cleaned with baking soda!

Uses: You probably already use baking soda when baking cookies, muffins or cakes. You can easily make cleaning solutions with baking soda and apply it to your sink, bathtub or oven to remove spots and stains. Baking soda easily removes coffee stains from your daily mug and can make glassware brighter. Many find that a bit of baking soda in the laundry helps remove odors and stains. Baking soda is really good at removing odors so sprinkle it on your carpeting or inside your dishwasher, or place an open jar inside the refrigerator, freezer or closet. You can even use baking soda as a toothpaste and denture cleaner.

History: The exact origin of the lemon plant isn’t exactly known but it’s thought to have originated in northern India or southern China. As world trade expanded so did the lemon, and became prized for its use in medicines, like the treatment of scurvy, and is an important plant in Ayurvedic medicine. The pH of a lemon is low, making it acidic, and the flavor is sour. This fruit quickly adapted to various culinary regions, becoming a feature on the tables of Europe, the Middle East, the Mediterranean, and the New World.

Uses: Lemons are an incredibly versatile fruit and you probably already use it in your cooking and baking. After squeezing out the juice of a lemon, toss that leftover peel down the garbage disposal for a quick, refreshing scent. Sprinkle salt on half a lemon and use it to clean and brighten your copper pots. Rub a lemon half over stainless steel or brass to remove spots. Toss part of a lemon in a bowl of water and heat it in the microwave to remove caked on spills and deodorize the inside. The juice of a lemon (one lemon has about 3 tablespoons of juice) can help dissolve grease and grime. The essential oils of a lemon are considered to be antibacterial, can be used as an insecticide, can be used as a wood furniture polish, and the scent can help make any room smell fresh and clean.

History: Vinegar has been used throughout history. Traces of vinegar have been found in Egypt dating back to 3000 BCE and may have been used to fight bacteria. Many ancient cultures used vinegar for food preservation, medicinal purposes, as cleaning agents, and as a food enhancer. There are all sorts of colors and flavors of vinegar, from the dark, thick balsamic to the cloudy, orange apple cider. There is malt vinegar, fruit vinegar, rice vinegar, cane vinegar, wine vinegar, and many other varieties. Essentially vinegar is the result of fermentation of ethanol, and consists of acetic acid, water and sometimes flavoring.

Uses: Vinegar has long been used for good health, preservation of food and for cleaning and today many homeowners rely upon vinegar to perform a host of jobs around the house. Vinegar is acidic and can easily etch or leave marks on natural stone like marble. For cleaning around the home try using distilled white vinegar.  Simply pour it on a dry cloth and rub it on stainless steel to remove fingerprints or spots. You can use this same method to clean the inside of your washing machine and dishwasher, particularly the rubber gaskets and seals. Mixed with water it makes an excellent cleaning liquid for flooring or other surfaces like glass. Use it as a rinse in your coffee maker to remove oily coffee residue. Vinegar can remove odors too. Try boiling a tablespoon in a pot of water to remove household smells or place an open bowl of vinegar in a stinky cupboard or fridge. Vinegar can remove sticky residue, like a sticker or tag that won’t come off.  You probably remember this from science class: mixing vinegar with baking soda will produce an effervescent effect and can be a great combination to battle dirty dishes and also works well as a drain un-clogger (follow this up with some boiling hot water down the drain).

History: Salt is comprised of sodium and chloride (NaCl) and in the days before refrigeration, salt became the leading method to preserving foods. Historically and economically, salt was a prized possession throughout many cultures. Salt was so valuable in ancient Rome that soldiers were sometimes paid in salt (the Latin word for salt is sal, which is where we get the word “salary”). Dozens of expressions have derived from this mineral. “Worth his weight in salt,” “salt of the earth,” “take it with a grain of salt,” and “to sit above the salt” are all recognizable phrases we still use today.  Salt would have been a featured object on a table, but only placed closest to the head of the table. And salt was a common gift to bring someone to their new home. Whole geographic areas in Europe were named after salt mining, like Saltzburg, Austria, the salt road in Italy (via Salaria), and in Britain the suffix “wich” means a place of salt or brine.

Uses: Salt is abrasive and is a perfect weapon against caked on, baked on grime or grease. Sprinkle it on a cutting board to thoroughly remove debris, or sprinkle in your mugs to remove coffee or tea stains. Salt is absorbent and can help soak up wine spills or other stains on fabrics or fibers. Use salt to melt ice, use it in the wash load to remove perspiration stains, or remove lime buildup in the sink. Sprinkle salt on a lemon half and use it to scrub and polish copper. Sprinkle salt on the windowsill to deter ants.

History: You might think that composting and recycling is a new idea however it wasn’t that long ago that households reused or recycled nearly everything. If you lived on a farm, or had property, you’d most likely feed your leftover food scraps to the animals or place them in the ground. City dwellers in England would rely upon the rag and bone man to buy leftover goods that weren’t reused or recycled. Victorian households had a surprising lack of waste – much of this can be attributed to lack of food waste (no food was ever wasted), reusable packaging (no plastic), buying only what the household needed (no electronics replaced every few years), and lack of sanitary department to pick up rubbish (higher motivation to reuse). Mending was both economical and earth friendly and belongings tended to have a longer life cycle.  Ancient Greece actually had a ruling about dumping waste outside the city limits as far back as 500 BC and Londoners regularly needed to revisit public dumping laws due to outbreaks of cholera and concerns for public health. New York City was among the first cities in America to create a formalized garbage management system in 1895, but other cities took longer to organize sanitation departments. Fortunately for households today we have opportunities to turn leftovers and garbage into useful products both outside and inside the home.

Uses: It’s a smart idea to get to know your city’s policies on rubbish and recycling; your yard waste bin, for example, might also collect food scraps. And your recycling bin may accept more types of plastic than you think. There are many leftovers in your home that you might already be reusing like glass jars, egg cartons or newspaper, which can be used for all sorts of ways in the home. Don’t forget the more “old fashioned” ways of using leftovers, like saving old linens, towels and clothing for cleaning rags or polishing projects. Try using old toothbrushes for cleaning hard-to-reach areas of the home or car. Soot or ashes from the fireplace can be spread in the yard as a nutritious additive, so can your used coffee grounds or eggshells. Seashells make excellent scraping tools, lemon rinds can be used to deodorize your kitchen sink, and newspapers can be used to clean your windows.

History: Using all parts of the animal was how our ancestors lived, and it was common practice to use the hide, bones and fat for all sorts of household uses. Animal fat helped illuminate homes until natural gas, then electricity, became common. Animal fat was also used to make soap, protect the skin, seal containers, protect clothing from water and many other uses. Technological advancements may have replaced our animal fat usage however our homes still need, from time to time, the coating and lubrication that oil provides. Olive oil, made from the fruit of the olive tree, was thought to have been produced in the Mediterranean as far back as 6000 BC. Coconuts have long been used by the peoples of Asia and the Pacific for thousands of years. Both oils were historically used for a multitude of purposes: food, medicinal, personal health, beauty, fuel, and in religious ceremonies. Today we don’t have to rely upon animal fat to illuminate our home, and it’s easier than ever to purchase olive and coconut oils.

Uses: You can use both types of oils around the home for many purposes (other than cooking or baking). A thin coating of olive oil over your stainless steel refrigerator can help keep off fingerprints. Coconut oil does a great job seasoning your cast iron skillets or BBQ grates. A bit of oil or fat can help unstick a zipper, take the squeak out of a door hinge and makes drawers roll smoothly. A small amount of olive oil on a dry cloth can help polish wood furniture (add some lemon essential oil and it will smell better than Pledge). Rub your garden tools (like shovels) with oil to keep them in good condition. Your shoes will look a bit shinier with a homemade oil polish.  Coat your measuring cup with oil to prevent sticky substances, like molasses, from sticking. Both of these oils work well for the body as well. Use them as moisturizers for the hair or skin, use them for treating irritated or cracked skin, or use it to remove makeup. Sticky bandaids come off much easier when the adhesive is rubbed with oil.